Skip to content
Home » Blog » Is Dogecoin yet to survive another threat as its price falls by 23%?

Dogecoin is going through a tough test, being on the stage of heated debates for the past few days and the rumor has it that something brought out as a joke could be put in danger by humorous talks.

Only a few hours following the dubious tweet by Elon Musk, facetiously known as the “former CEO of Dogecoin”, Dogecoin experienced a drastic drop in its price due to misinterpretation of Musk’s statement. Musk raised a concern on large investors holding onto significant amounts of DOGE in their portfolios and expressed his approval of them exiting the investment. However, it is believed that he did not intend to completely scare off the investors from owning this meme-winner crypto.

Even though it is a bit difficult to examine the precise distribution of Dogecoin throughout the market due to the anonymity of the public blockchains, many researchers have demonstrated that the great majority of the total stock is owned by around 100 holders. If the situation remains to be unchanged with over 70% of the Doge supply held by large whales, then Dogecoin might as well lose its status of being decentralized and could end up as a target of later manipulations. That is exactly what Elon Musk clearly understands and calls upon avoiding it.

How can the Entertainment industry save Dogecoin from being manipulated?

Except for the original idea – to take away DOGE from large investors and make more of it available to the smaller investors, there is a nicer plan already in place, which is crypto casinos. More and more casinos seem to embrace the idea of implementing cryptocurrency deposit options and huge attention has been paid to Dogecoin, as well. The fact that doge is easily accessible for players and transactions involving dogecoin take a second or two, compared to BTC or ETH requiring around 30 seconds, makes doge casinos popular and even preferable for many. Some of the best online casinos that accept DOGE serve as one of the ways of distributing the currency in smaller concentrations over the market.

What will happen to Dogecoin in near future?

Facing the current situation, with the price of Dogecoin dropping from 0.063$ to just 0.047$ investors started to worry over the volatility of the currency’s market price. Many of them believe that Elon Musk’s tweet was not the only factor determining the fluctuation in price, but it had to do with the significant rise in Bitcoin’s (BTC) price which has achieved a new record. Observing the pattern over the last period, one can notice that the trend is descending with two major downswings very close to each other. However, we believe that as soon as Elon comes out clear on his intentions and experts take over the debates, Doge should once again stand strong in the market.

How Doge maintains the popularity till today?

Probably, it is one of the most famous and well-beloved cryptocurrency stories of how Dogecoin was born as a result of the joke. Established from an online meme “doge” and as an extremely cheap coin worth much less than a cent, nowadays it holds 31st place on CoinMarketCap for market capitalization. To be honest, Dogecoin is still a leader in the so-called meme industry and remains the favorite topic in the communities such as Reddit.

Nonetheless, it is quite interesting to observe the relationship between Elon Musk and Dogecoin as in fact, the former’s views almost always affect the coin in certain ways. However, if Musk continues to put the effort in maintaining Doge freely available on market, one can only wonder how successful the initial joke may turn out. 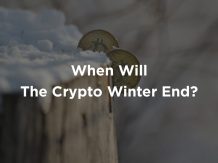 When Will The Crypto Winter End?